Image revolutions - the perfect way to a destination

"Differentiate or die" – the slogan created years ago by Jack Trout is still one of the most commonly used strategies when it comes to marketing.

One of the reasons why, is that it has not lost its viability. This is one of the most commonly expressed wishes by our clients. Very often doing something "different" is even more important than doing something right. I still remember a meeting about one of our first projects back in 2009. In their promotional video about their investment operations our client wanted a giant Titanic to sail through the middle of Gdynia's main Świętojańska street. I still can’t say whether the idea was absurd or on the contrary – ingenious! In the end we did not select such a risky form and in the video ships only appear in the harbour.

Over the next years the request to "do something different than others" has repeated itself during meetings 4 times out of 5. Of course, it’s fun to do something innovative. Decades ago someone tried to race an F1 car which was based on three axis. It did not lead to a success on the race track, though. But on the other hand, Ian Boklev revolutionised ski jumping at the end of the 80s by discovering that you can jump longer distances if you make a V out of your skis. Nowadays nobody thinks of doing this differently.

So what does that fifth client ask for if the rest requests "something different"? The fifth one says: "Guys, do it the best you can."

In contrast to the slogan from the beginning of the post – doing something the best you can and in the most proper manner possible often yields better results than trying to force some extravagant concept.

There’s one more client type. The type I am always a bit afraid of. They force you, just like in poker, to show your hand and then they check which cards you are really holding. This client type surveys each card one by one and it's better to have an ace available :)

The Alegre transport company is such a client. Our co-operation looks just like in this comparison. 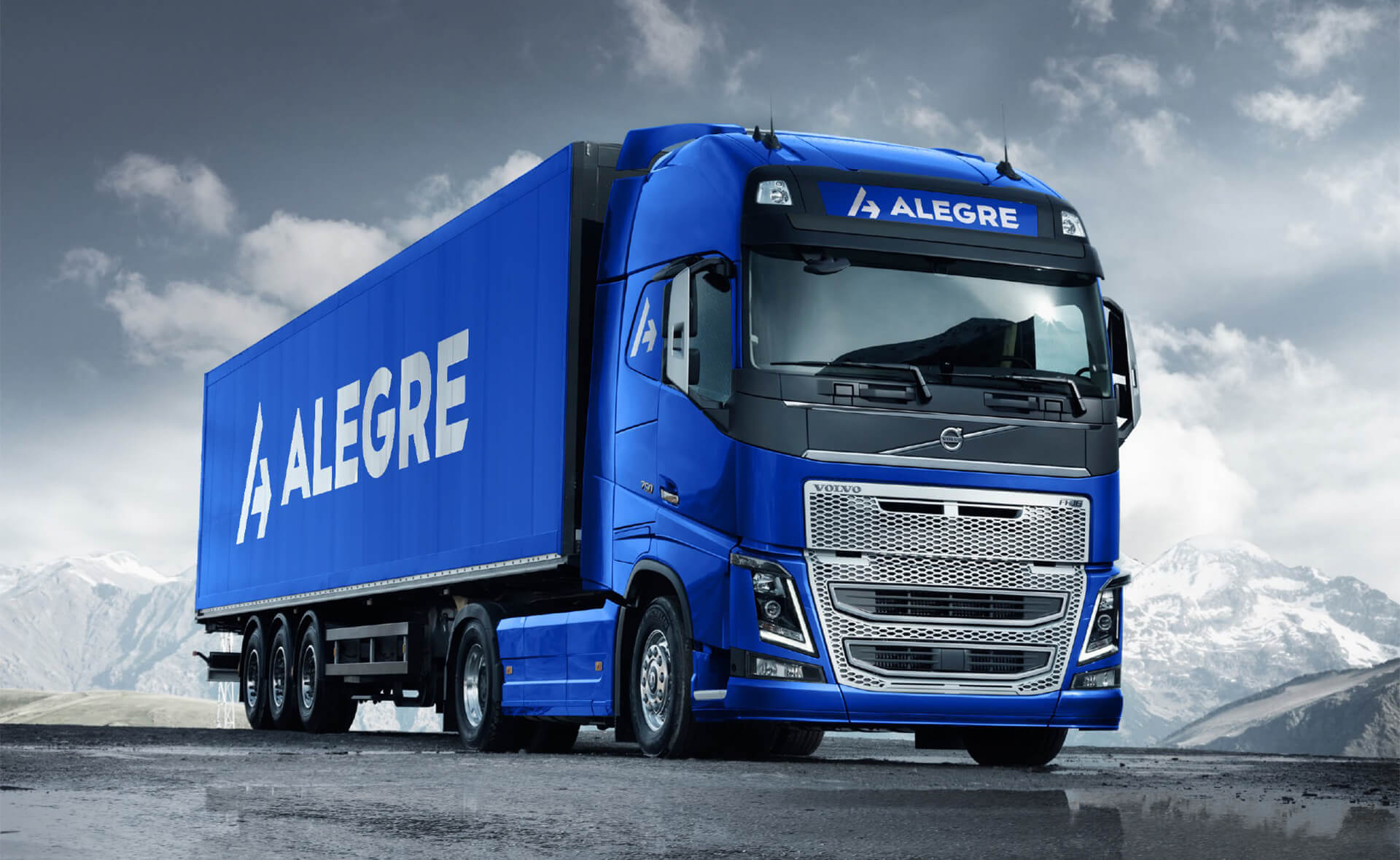 "Guys, I need a leaflet"

This is how it all started.

A simple, random sentence tossed among all the other things we were doing at the time. This could have been a simple request like so many others, which will lead to nothing the moment we send our pricing, because of course, designing should always be free :) It turned out that is wasn’t the case. Fair pricing for such a small project resulted in a quick approval. The leaflet looked pretty cool, but the archaic logo was the main issue. It was saved by great photos we got from Malbork. 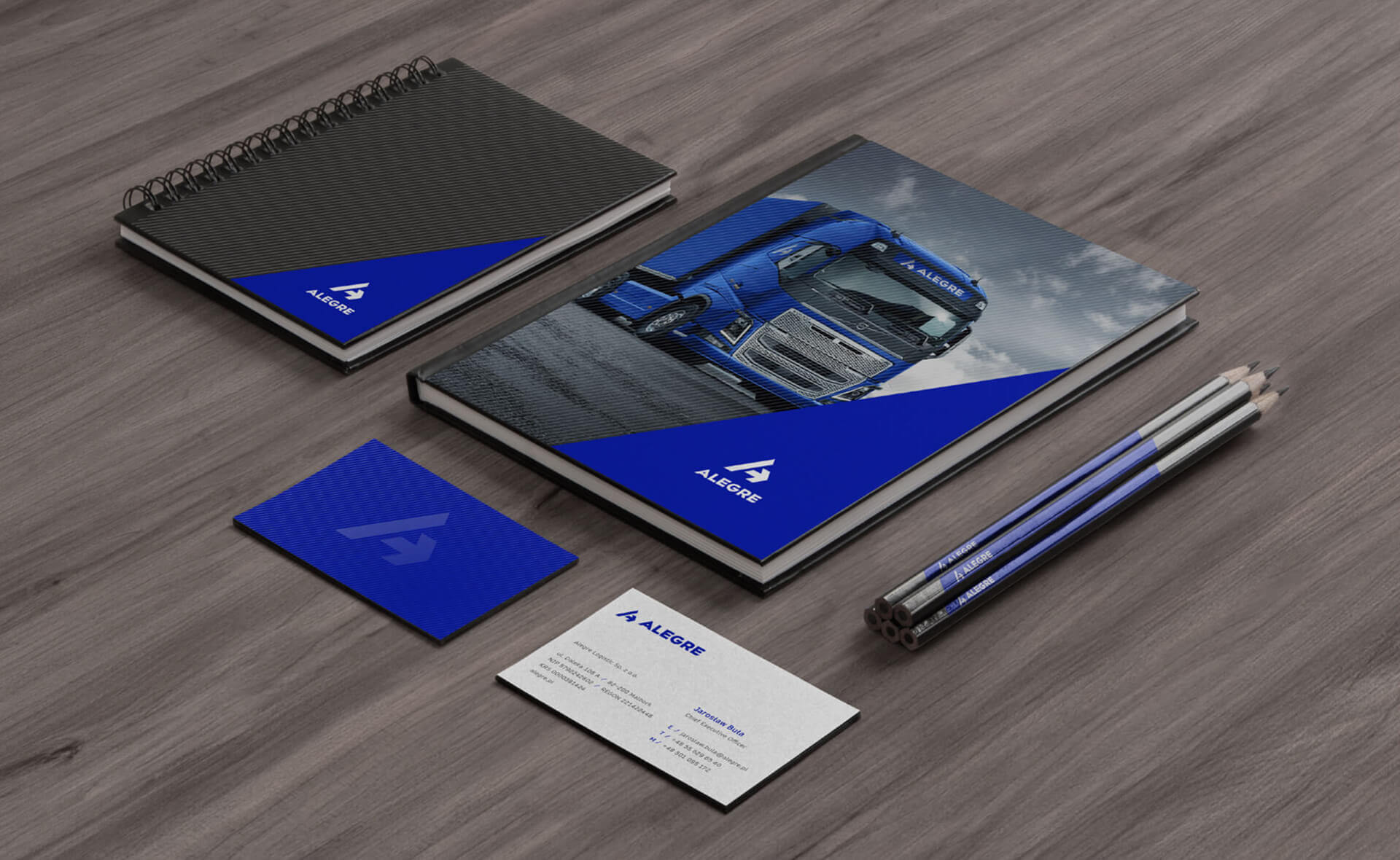 "We’d like to check out how you work, so maybe we’ll do something bigger?"

It turned out to be a webpage...

It’s all well, but darn it, the logo really did need some refurbishment, or even a full replacement. OK, we have to be frank about it. You can’t make a webpage just like that... 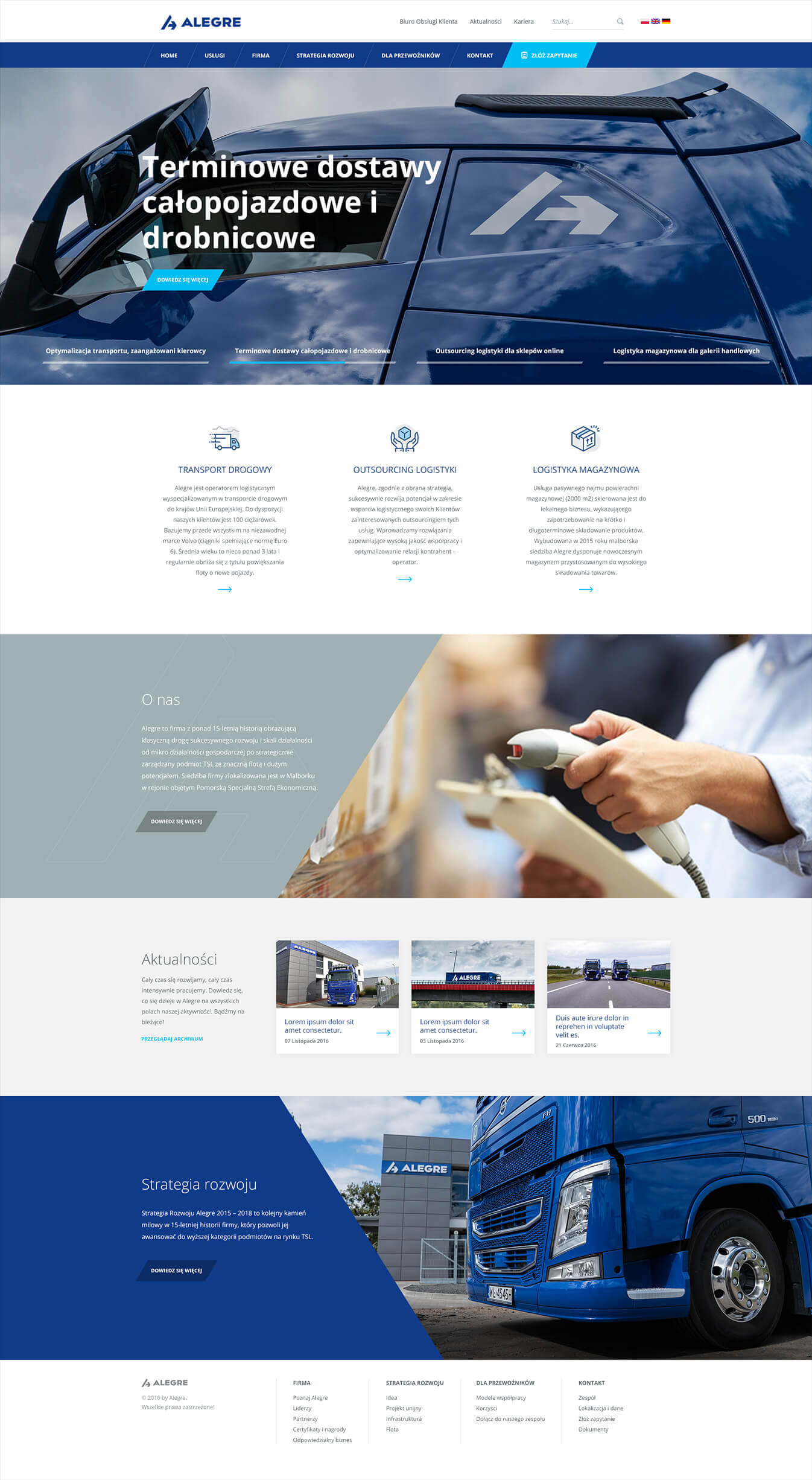 We struck a deal very quickly.

After the mail with our offer and a couple of phone calls the time had come for the first face to face meeting. Just like in Casino Royale but without the need to inject adrenaline into the heart. We looked each other in the eye and developed mutual trust. After all, we are supposed to be playing for the same team.

The subsequent steps looked like the ones presented in the offer: three new logo options, development of the selected one, examples of use, simultaneous work with the copywriter and text preparation, creation of the main page graphics and then the subpage views, and in the end the cherry on top – programming! 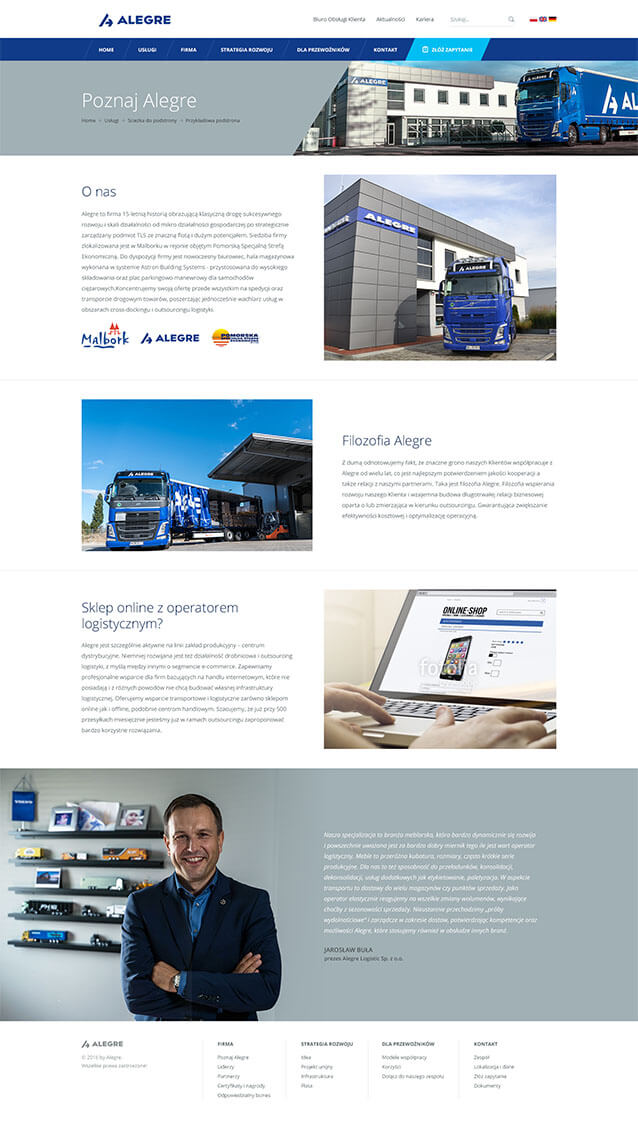 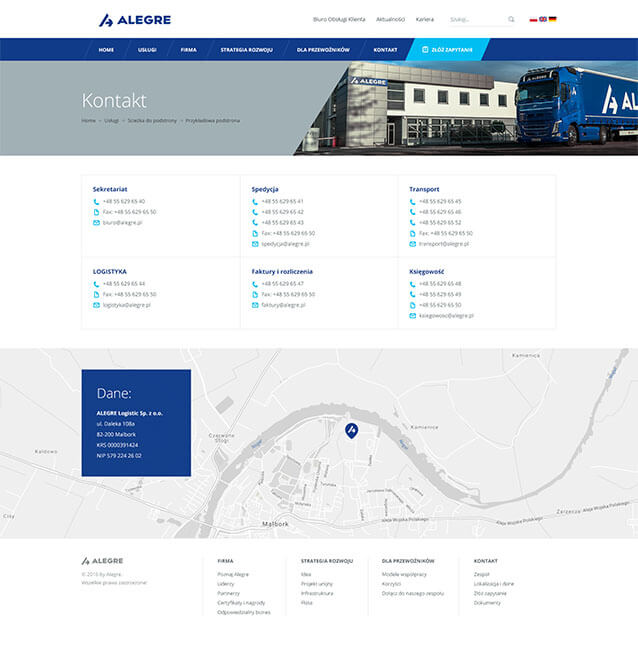 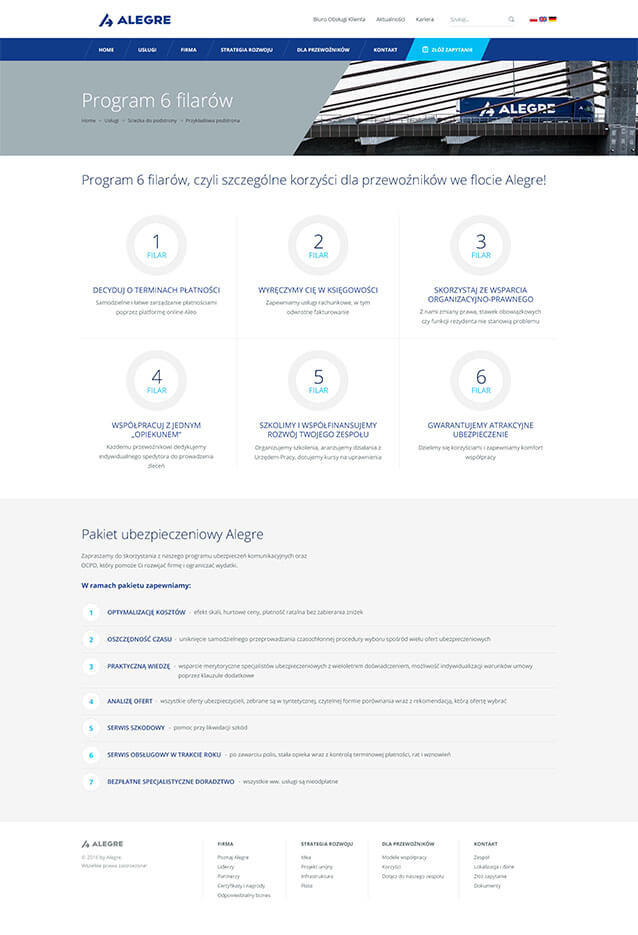 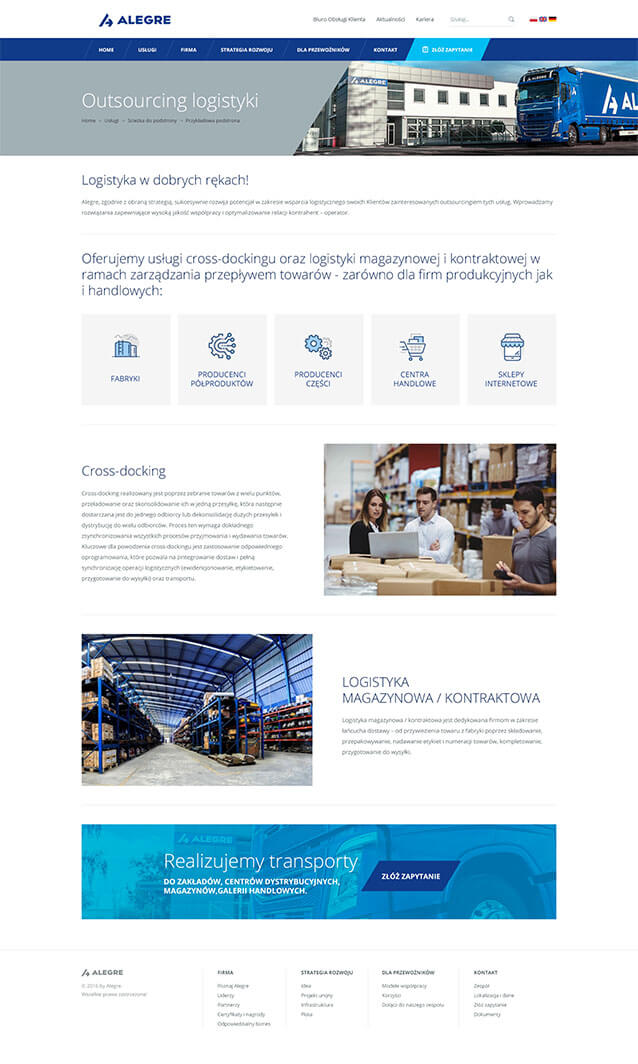 "OK, you've convinced me. Let’s try this out and see what happens after a month".

This quote pertains to the social media.

When we developed the new identity and launched the new webpage it was only natural to want to show off the new image. It's like going to the tailor to order a new, great looking suit according to modern fashions and trends. And instead of going to a ball at the embassy, you put it on, sit in an armchair and listen to a Donald Fagen record. "The Nightfly" album is pure genius, but showing off your new suit can be pretty awesome as well.

This is why I was shocked when during our monthly conversation with Mr Radek from Alegre I heard a very polite "no". 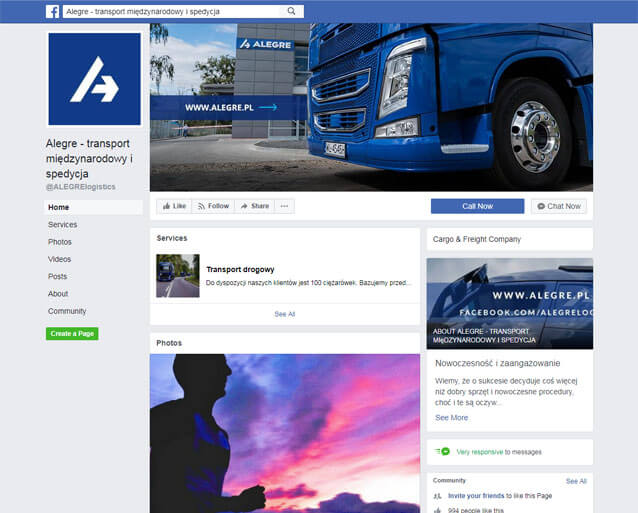 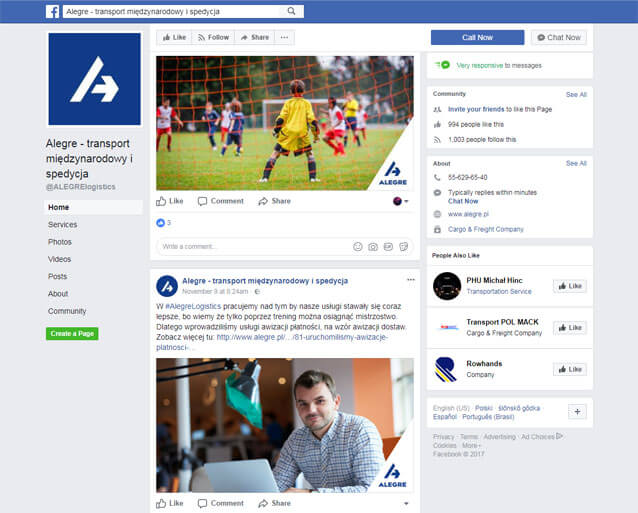 Of course in the transport business social media is not the main channel you use to reach your clients or employees. This subject is much more complicated and I don't want to present it in detail here, but all in all well managed social media profiles affect not only brand positioning but also extend your reach on their own.

"OK, you've convinced me. Let’s try this out and see what happens after a month."

When I heard these words I knew that we were supposed to use the last card that we were holding in our hand. Of course, we always have some aces up our sleeves :) but at that moment I felt relieved and complete. "This client will be perfect for our portfolio," I thought.

It all started with a simple leaflet and after a year we could proudly say that we had done a really good job.

And now my wife is always surprised that whenever we drive on the road to Chojnice I yell: "Oooooh! Look! IT’S ALEGRE!" And then I add: "We did the design for that identity". And every time she replies: "I know, you tell me that constantly."